Slow Food On The Way 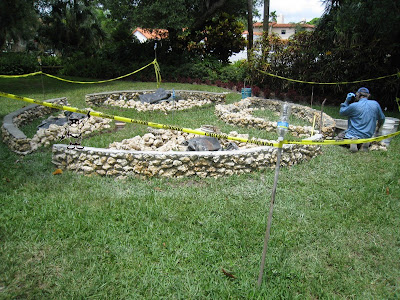 Slow Food is coming to the Merrick House this fall. About 35 years ago I had a garden in the back of the house that produced all of the vegetables that we needed for the year. I did it for at least 5 years. That was slow food before It was called any thing other then a vegetable garden.
Posted by TOG at 3:37 PM

A Tent On One Of My Favorite Houses In Coral Gables 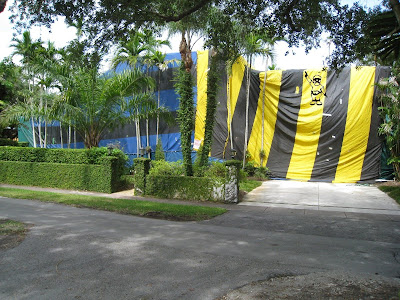 The house is has tented and filled with poison to kill the termites.This is the first time that I remember that this house needed the tent (at least in last 40 years). We have tented our house twice in that time. That's something that happens often in a tropical area.
Posted by TOG at 8:56 PM

A Brassavola nodosa Hybrid Hanging In Our Garden 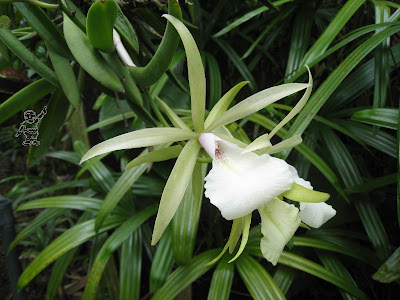 I have had this orchid for 20 years and have never found a proper name for it. I think it might be Euchile mariae x B nodosa. I Googled that name with no answers.
Posted by TOG at 4:56 PM 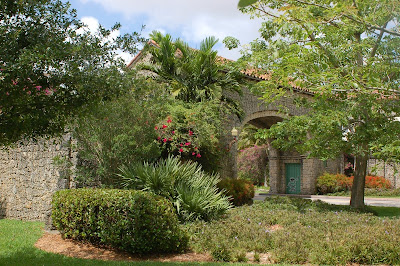 We have a lot of entrances but no city walls. This is one of the smaller entrances. The entrance is on the north border of our city.
Posted by TOG at 1:45 PM

Bromeliad Plant Getting Ready To Bloom 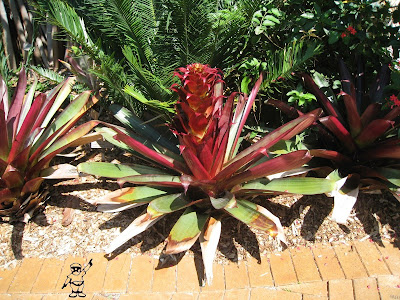 The flowers are not open yet. They will be little yellow flowers on the top. The beautiful red leaves are what catches your eyes.
Posted by TOG at 7:51 AM 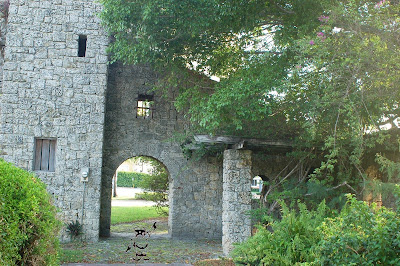 This is one of the lesser entrances, but it's a treasure.
Posted by TOG at 4:55 PM 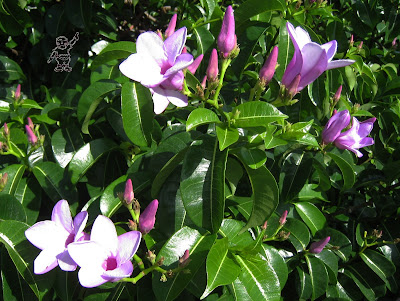 More lavender than purple, the flowers are plentiful on this plant that differs also in its leaves from its cousin the yellow allamanda

Douglas Entrance On The North East Of Coral Gables 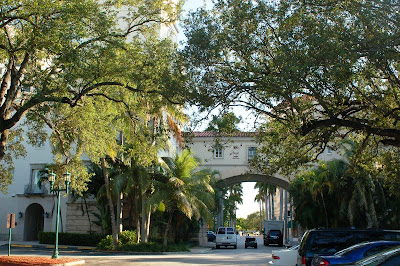 This is the portal that most people used to enter our city. We weren't walled in, this was just a very pleasant way to come in. The road has been closed at 8th Street for about 40 years, it was a traffic disaster.
Posted by TOG at 7:17 AM 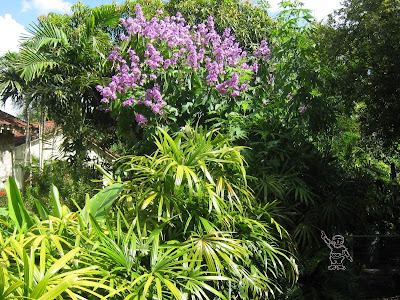 It is important to the health store people. They sell a product from the Lagerstroemia speciosa that can help you lose weight. I think it only works if you believe. I know it as Queens Crapemyrtle a small tree with really neat flowers.
Posted by TOG at 2:17 PM 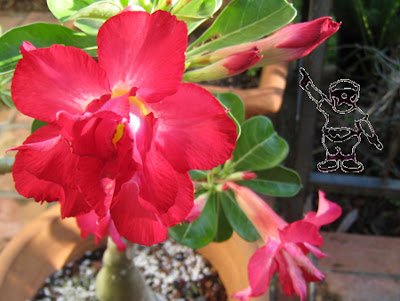 The Grotto At The Merrick House 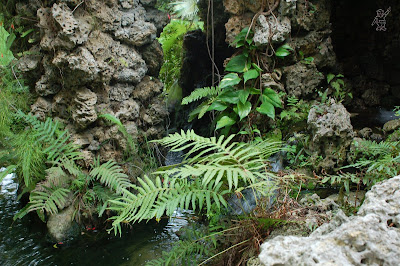 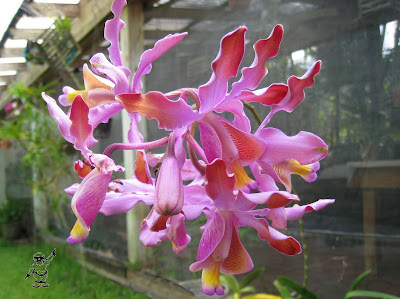 This orchid comes from Mexico and all the way to Colombia. The large psuedobulbs are hollow with an entrance at the base and ants live in them. When the flower spike was growing the ants were all over the stem gathering nectar. The 5 foot stem and the flowers have nectar. Notice the ant on the flower. I let them alone because they bite.
Posted by TOG at 7:09 AM 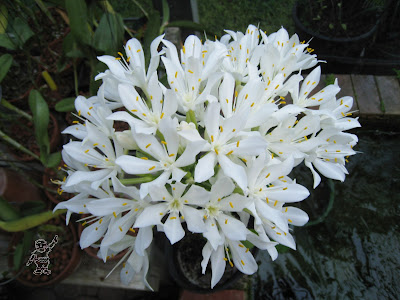 I thought that the lily would have damage from the cold winter. The flowers are bigger then ever.
Posted by TOG at 6:02 AM 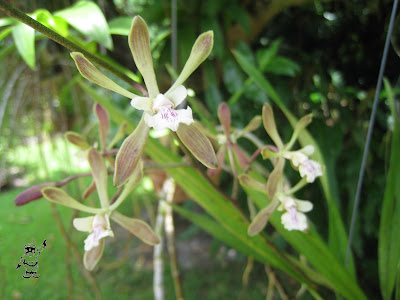 Merrick's Neighborhood Is On Coral Way 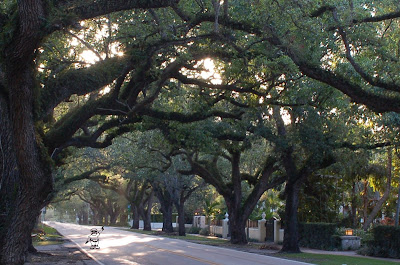 Our street is lined with these beautiful oaks. It's surprising how many times that I see a tourist park their car and take a picture like this. Yes it's a Way, not a St., Ave., Ct., Tr., or Blvd.
Posted by TOG at 8:12 PM 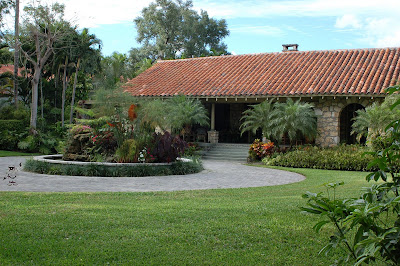 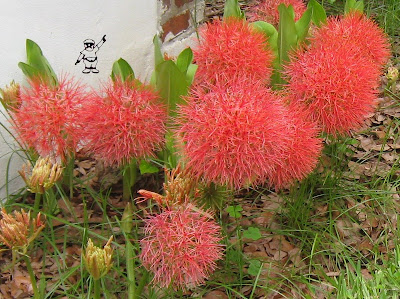 The blood lilies are different this year. Normally they all bloomed at the same time for a fantastic show. This year they are not together. We will enjoy the flowers for 3 weeks or more. In the past we would have them for only one week.
Posted by TOG at 7:53 AM

This Orchid Was Damaged By The Cold Winter 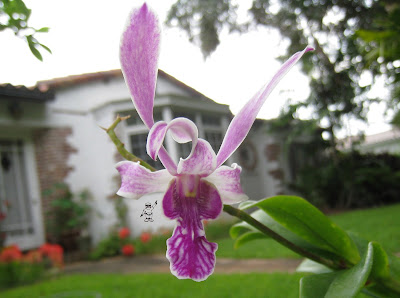 This Dendrobium orchid should have at least 12 flowers on this stem and a few more stems. I'm happy that it is alive and I have one flower. Like any gardener, I will do it better next year.
Posted by TOG at 7:30 AM

A Pink House With A Pink Plumeria Tree 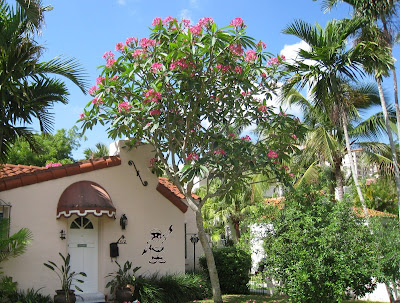 A Nice Poinciana In The Parking Lot Of Our Church 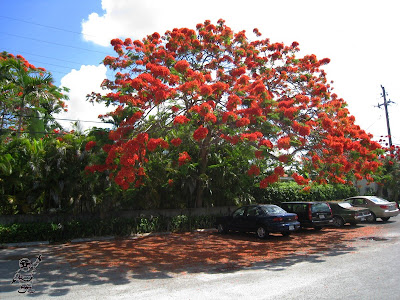 Just enjoy them, they are all winners.
Posted by TOG at 7:09 AM 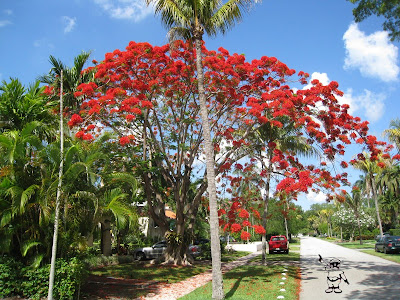 Enjoy the Poincianas because it may take 60 or 70 years to see them this good again. The last time that we had a winter like this one was in 1941.
Posted by TOG at 5:12 PM 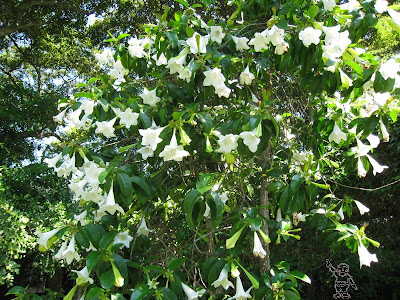 An Old House And It looks Modern 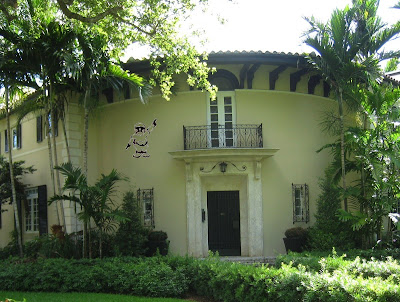 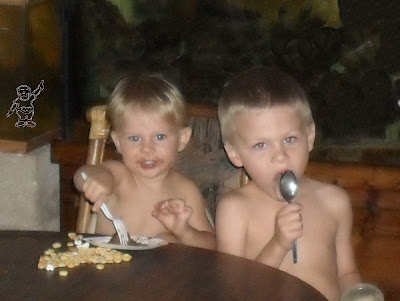 The 18 month old took the chocolate cake out of the fridge and then his 4 year old brother brought some cereal. The parents were there, unfortunately not in that room. I can write more about our grandsons but the picture tells everything.
Posted by TOG at 8:00 AM

Hollyhocks In Our Garden 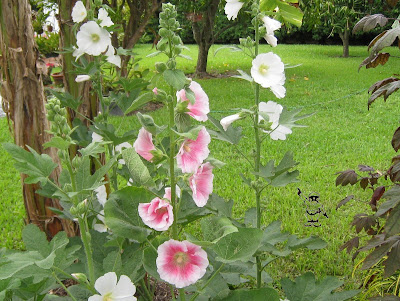 I haven't grown hollyhocks since the 50's. The northern hollyhocks with doubled flowers will not grow in south Florida. I was told that the type that I have came from Mexico.
Posted by TOG at 5:35 AM

They Are All Over The City, Some Call Them Flamboyant 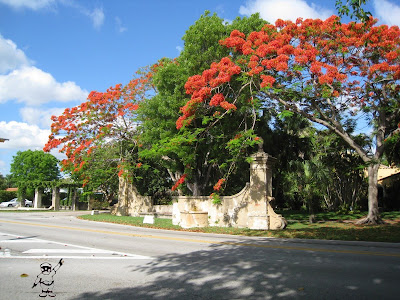 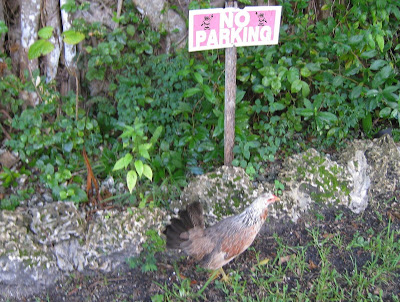 We have regular policemen and then we have this police-hen. Last August 10, 2009 we saw this hen guarding the Merrick house. The hen was out there on guard for a month. By the second day we were friends.
Click here to view thumbnails for all participants