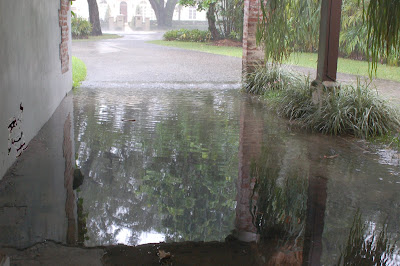 We had rain Monday, Tuesday, Wednesday, and now again today (it's better then a hurricane). When the rain is very heavy, the water puddles in the carport. But when the rain slows up the puddles disappear. I wasn't able to work in the garden, so I sat down and enjoyed the rain. Here is another picture of that rain.
Posted by TOG at 8:25 AM 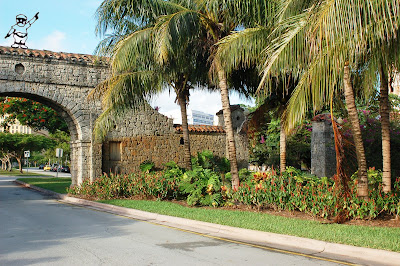 The cities planting is colorful all year around.
Posted by TOG at 7:16 AM 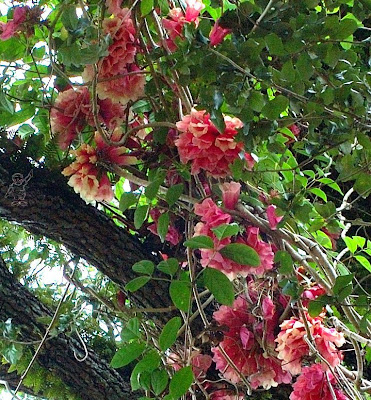 This vine blooms profusely in the spring. But in the fall and winter it flowers sporadically. This year it's different, the vine is in full bloom now. This vine grows in a very large oak tree and you have to look up or enjoy the flowers that have fallen to the grass. Taking a digital picture into a tree that has a background of bright sky is a problem(at least it is for me).
Posted by TOG at 7:38 AM 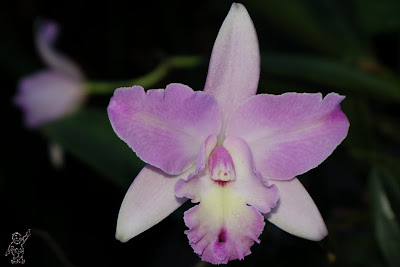 This orchid grows outdoors in my garden. I give it a little fertilize and it rewards me with some pretty flowers.
Posted by TOG at 10:38 AM 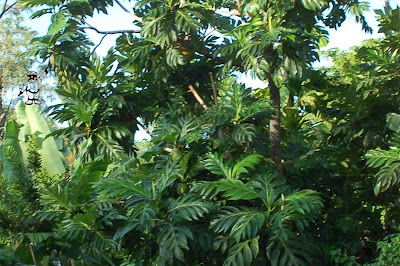 This breadfruit tree is near the Granada entrance. Notice that the TOG is pointing to a fruit. Forty years ago I tried to grow this ultra tropical fruit tree. Of my two tries I had one that lived for two and a half years. They died of root fungus when the ground went to 40 degrees. This month I planted a grafted one that has superior fruit. I had no idea that anyone was growing it in a garden north of Key West.
Posted by TOG at 10:01 PM 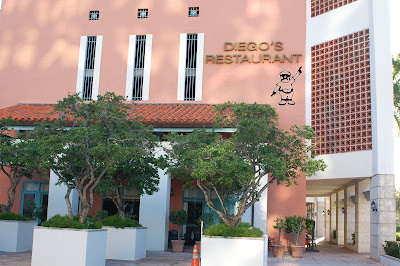 When the weather is good (most of the time) you can dine on Diego's terrace and see the reflecting pond. Last Sunday I stopped in the beginning of the 100 block of Alhambra Circle to take a few pictures. I walked in all four directions, only one half a block in any one direction, to get all of the pictures that I posted for the last week. At 8 AM cars and pedestrians don't get in the way. I just wanted what's new in Coral Gables. OK the Paloma wasn't new.
Posted by TOG at 9:41 PM 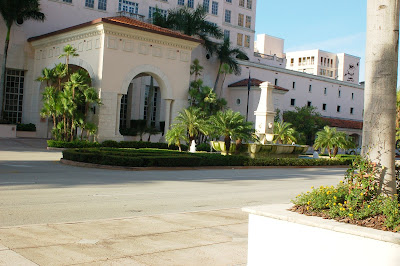 This commercial building put there fountain in the middle of the street. For a closeup click here. Public art seems to be going for water features. Interesting, the city has stopped all of its fountains until we get more rain.
Posted by TOG at 5:06 AM 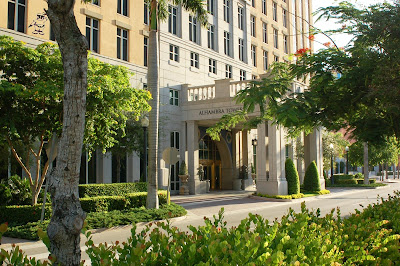 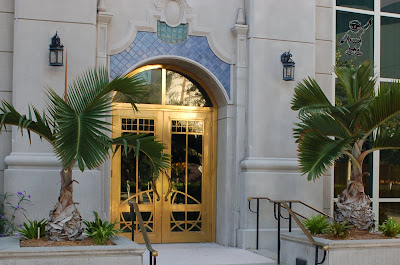 This land was first used as the cities post office. It was a beautiful one storey with a colonnade around the building. It was sold to the Presbyterians and was used as a church. It was one of my favorite buildings in Coral Gables. But when the congregation grew they tore the build down and built a large sanctuary. It was nice but I missed the older building. In the last ten years the church dwindled and sold the property. This commercial building now has replaced the church. I still miss the post office.
Posted by TOG at 8:29 AM 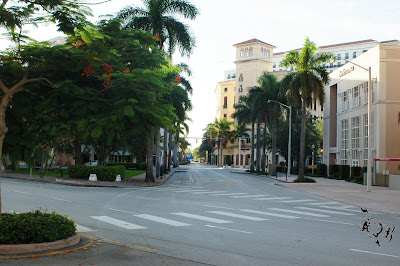 On the left a park sits on an island with streets on all three sides. In 1940 this small triangle plot of ground was a gas station. Back then we had more gas stations in the downtown area then any other type of building. By 1942 most gas stations were closed and the one on this site never opened again. I don't remember when the city made it a park, but I'm glad that it is a park.
Posted by TOG at 7:44 AM 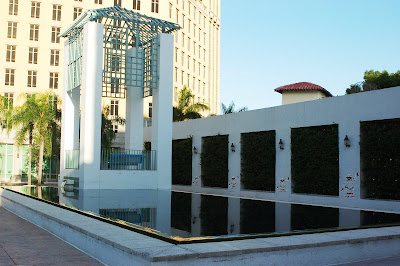 This water feature is part of the art in the new construction law (all construction except private homes). Within one block there are three water features related to new high rise buildings. The water fall at the back of this reflecting pool produces a nice sound, but for some reason it doesn't ripple the mirror affect.
Posted by TOG at 7:55 AM 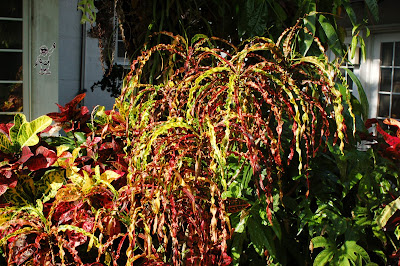 This croton is very beautiful but will never get to the market. It has all the attributes that a croton should have, but one. It is a very slow grower. No one could make any money on this plant. It took me 30 years to get it this big. Many visitors want a cutting of the plant but no one wants to wait 10 years before it gets to look mine.
Posted by TOG at 1:07 PM

A Porch to Live With 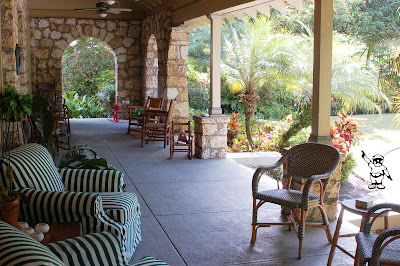 Friends of ours have this porch and it gets a lot of use. It's a spot to watch the world pass bye. The chairs tell you that it is used. The best time to be there is as the sun goes down and the breeze from the ocean makes it very comfortable no matter how hot the day might have been.
Posted by TOG at 8:01 AM 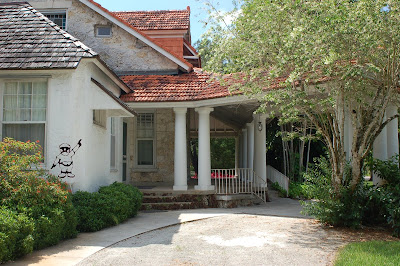 This is a view of the back door. The best part of the picture is the porch. It starts on west side of the house and then continues all the way around to the east side. Unfortunately it is the city house museum and no one sits on the porch to enjoy eventide. Here is another view of the porch.
Posted by TOG at 7:48 AM 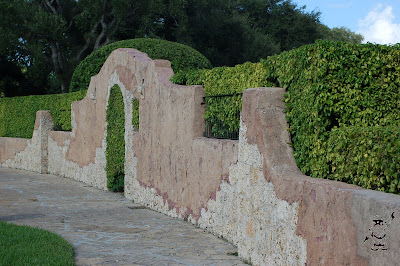 This wall relates to the pond and fountain to the left, one of the many water features in the city. Now I am looking at the home owners ficus hedge behind the wall. They have managed to completely hide their house from public view. I'm not too found of the house, but it's better then the hedge.
Posted by TOG at 10:16 AM 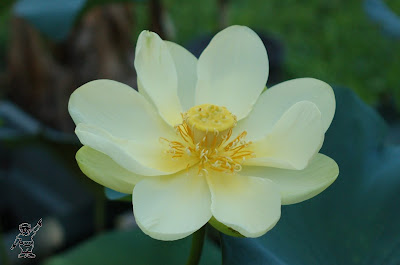 This Lotus grows from Maine to Texas (This map will show were N. lutea grow in the wild). My plant came form Lake Okeechobee and this is the first flower from my plant. The leaves are a dark blue-green and the petals are much wider then average. To see pictures of the other lotus that I grow,click here.
Posted by TOG at 11:30 AM 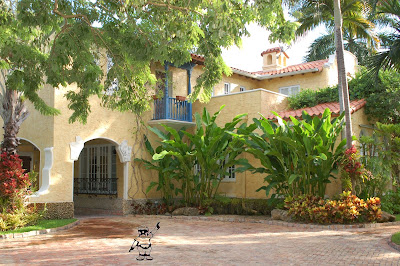 The blue balcony is just waiting for Juliet. 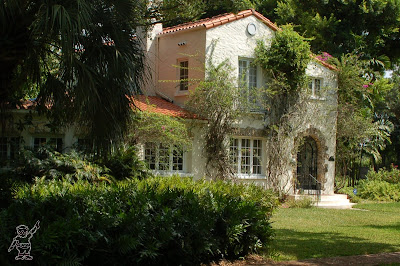 The front of this old house is covered in bougainvillea. Today it looks like Prince Charming should stop by and trim the bougainvillea. Every winter the house is clothed in purple flowers.
Posted by TOG at 8:32 AM

A Fix for a Chronic Problem

There is a chronic problem on our street. For the 40 years that we have lived on the street when it rains, it floods. During that time the road has been repaved three times, each time it raised the road two inches. In front of the house the road is at least 8 inches higher then the sidewalk. The road never floods, but we do. Since it is a state highway the government pays for the drainage program. The drains will be in our driveways. This state highway is a two lane road because the street is a historic road and can not be widened. 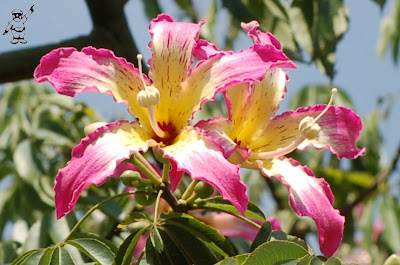 This South American tree, Chorisia speciosa has a brilliant display of pink, lily-like flowers. It blooms best during the month of October, adding a touch of color at a time when most blooms are fading. The trunk is stout, green in color and armed with thick, heavy spines. The fruit is a large pod appearing in spring. When the pod opens it emits a cotton like material. The cotton is used as stuffing material like pillows. 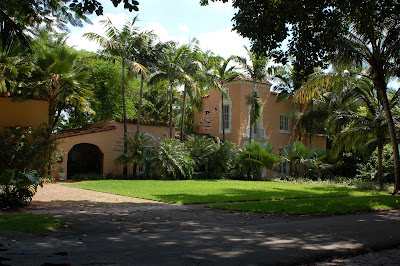 This house is more amusement then house. It has three stairwells to the second floor and they go to separate parts of that upper floor. To get to some parts of the house one would have to walk through an open atrium. It has three kitchens (in a single family zone). The master bedroom has a bath and adjacent room that could be a child's nursery and it doesn't connect to the rest of the second floor. The house has absolutely no flow. But it has sight lines. No matter where you are in the house or garden, it looks magnificent. Yes , I have been in the house when it was for sale.
Posted by TOG at 8:23 AM 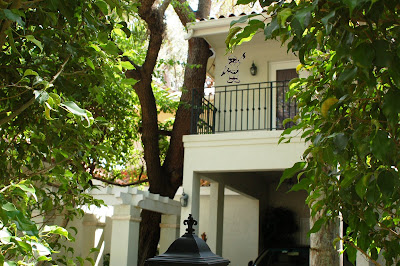 The builder wanted a big house and the city wanted the large oak trees to be spared. Now twenty years later the tree is a real house hugger. This is the tree at the back door. Click here to see the tree at the front door. Now you can see what happens when a tree hugger goes too far. 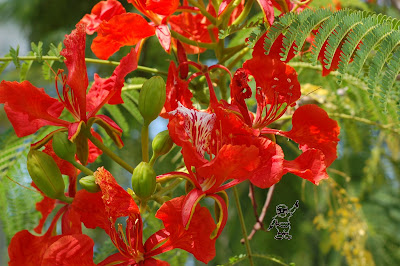 This close up of the poinciana flower shows the flag petal(the white petal). When the flower opens the flag petal lasts for only one day. Look at the flower behind the flag and see that the white petal is curled up. The flower will stay on the tree for many more days. That's why the tree looks red with only a little speck of white now and then.
Posted by TOG at 5:56 PM

Better Than a Cafe 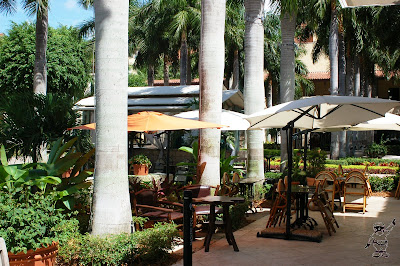 While the ladies shopped, a friend and I stopped here for wine and tapas. What a life, sitting in the shade with a nice glass of red wine and a few tidbits with a low calorie count. The breeze was nice, the temperature was bearable and the shoppers were interesting to watch. Best of all was that the shops are up scale the wives bought almost nothing. They had a good time and we enjoyed some good wine.
Posted by TOG at 8:45 AM

Shopping at the Village 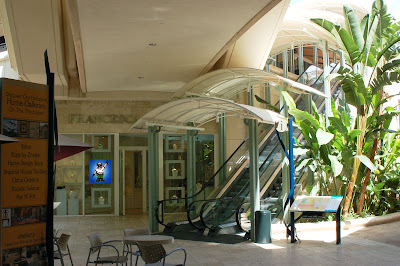 The mall is not like most malls, it's not enclosed. All shops open to the out side sun, rain, and humidity. Notice the covered escalator and the bridge above which is open. Today the watermark is in color,
Posted by TOG at 8:19 AM 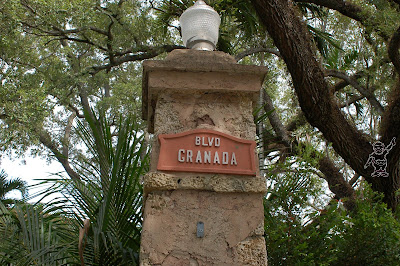 Pomegranate (English), Granada (Spanish), Grenade (French). and a lot of other names. In my city it is one very pleasant street. The street was named after the city in Spain, like most of are streets. I was raised in a house on a double corner and the street names were Cardena, Escobar and Palmarito. Granada stands for righteousness, abundance, fertility and good luck